Today is Time To Talk day 2017 so take 5 minutes to talk about mental health. It is so important that we get these conversations going because they can save lives as well as working to stamp out stigma.

This Time To Talk day, I’m going to tell you a little bit about how I’m spending it. I’m currently in a general hospital being tube fed for my anorexia, I’m on 2:1 observations meaning I have two members of staff with me at all times and I’m on a level 4 which means I must be within arms length of the staff members, this includes when using the toilet. So there the facts about my situation but now it’s time to talk about how I feel.

I’m confused, recovery and weight restoration is being forced on me and I’m not sure that I want it. I’m scared about the future, my team are looking for a unit to send me to and so far none have accepted me. I don’t know what the near future holds for me. I’m homesick, I haven’t been home in 18 months and I would give anything to sit on the sofa with my family and dog and watch some rubbish telly. I feel alone and lost, I haven’t seen many people in the last 18 months and my grandmother has passed away during that time, I never got to say goodbye, I wasn’t well enough to go to her funeral and that breaks my heart everyday. I’m annoyed and angry at myself for losing out on so much. My goddaughter will be 3 in March and I’ve missed so much of her growing up, my dog is 14 and I’m scared she will die before I get home.

Happy Time To Talk Day everyone!

I’m sitting on the end of my bed in hospital. Numb but in pain. I don’t understand anymore. Utter confusion. Dreaming of a future like a child, imagining I’ll be a vet or a teacher but seeing reality like an adult…I am just a psychiatric ward patient….I probably don’t even deserve the word ‘just’ in front of that. I’m a nothing, a no one. Three months locked away has completely detached me from the world around me. I belong nowhere and with no one. The world outside the window doesn’t feel like mine. It’s like I don’t remember what the rolling hills look like, nor the supermarket aisles or petrol stations. My ballet shoes disintegrated when my life turned into compost. Maybe new flowers will grow out of the soil but I doubt it. It feels like I’ll never feel the sun on my skin again and that my heart will never vibrate with the bass of loud music. Will I always be gone? Will I ever find me again?

The police cannot provide me with my PRN medication or administer it. Mental health problems are medical and most require medication. If they were to assess me at my psychiatric hospital then I would have access to a nurse who could administer medication should I need it. How are the police going to handle someone in need of medication in an appropriate and non-distressing way?

The police, whilst they have been kind and caring towards me, they simply do not having the training in mental health to help people who are desperately unwell. When my illness had beat me down to the ground, when I was exhausted from anorexia and crushed by depression I did not want to be explaining what anorexia is like or hearing, “So do you just not like food?” I needed someone trained in mental health to be caring for me and the option to have a conversation if I needed to talk.

Funding cuts aren’t just being made within the health care system, they are also being made within the police force. The police are needed to keep our streets safe, to fight crime and to arrest those individuals that aren’t complying with the laws of society. When I was unwell I had two officers with me for an entire Friday night…this was the Friday before Christmas. The police force needed those officers on the streets but because my mental health team didn’t step up and take responsibility, two police officers spent their entire shift sat with me in a hospital waiting room.

It’s absurd that people struggling with mental illness are told by mental health services to phone the police….it’s like calling for an ambulance because someone is having a heart attack and being told to phone the police instead.

These are peoples’ lives, a mental health crisis is often life threatening and getting the care wrong can have fatal consequences. The police’s resources are also limited, they need to be doing the job that they are trained to do. So why do mental health teams feel that it is appropriate to direct patients to call the police during times of crisis?

Following my recent detention under Section 2 of the Mental Health Act, I received my care plan in the post this week. I am receiving aftercare from my mental health team and I am in treatment and I am grateful for that because I know from past experience how fortunate I am to have help. However, I feel the purpose of a care plan on paper should be that people can refer to them. For example, if things were deteriorating or if I was in a crisis situation then my family or myself could look at the care plan and know exactly who to contact and exactly what the plan of action is. The thing is, the most important box on my care plan is blank: 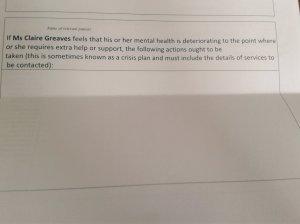 The crisis plan has no plan. There are no names, no contact numbers and it has never been discussed. If I were to be in a crisis tomorrow then I would have no idea who to call and it would end up going around in circles as always because in a crisis situation I always feel as though nobody is really sure whose responsibility it is to intervene. It usually ends up with the police involved.

I know the day to day bits that they have included on my care plan, I know who my psychiatrist is and who I see for appointments. I didn’t need that written down for me but the crisis plan. The life saving plan that everyone needs to be able to access isn’t included. I don’t even think it’s been thought about. Surely it is the most important part of the plan?! How useful would care plans be if everyone involved had a copy and in a crisis everyone knew exactly what to do from family to professionals? I feel like this is a box that isn’t optional to fill out, it should be a MUST and it should be thorough and up to date.

What is the point in a care plan that misses out the vital parts of care?